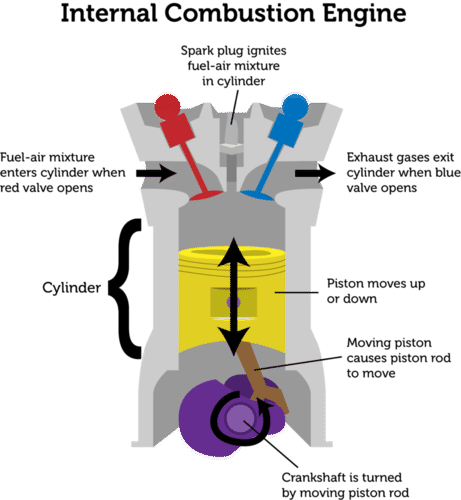 Higher compression ratio and larger piston bore in an engine produce higher power and torque. The higher compression in a combustion chamber makes the air and fuel particles compressed in larger density and in high pressure. Larger piston geometry (bore) will let more air passing through the combustion chamber. Both of these variables will create powerful explosion and burns fuel more efficiently. The modification will generate fuel economy and will deliver peak performance. However, these modifications have its drawbacks too. High octane gas is needed to keep the engine running in good condition which is more expensive than regular unleaded gas. Using low octane will develop engine knock. Engine knocking happens when the air-fuel combustion doesn’t happen at the exact time of spark ignition in the piston’s stroke. Furthermore, larger explosion actually create more power and will make the engine runs hotter than normal. Larger piston bore also require more fuel to burn to compensate the larger air flow through combustion chamber [1].

As we known gasoline engines burn fuel to create motions. The reaction of mixture of fuel with oxygen in the air is cause from burning of fuel. This is called air-fuel ratio (AFR). AFR is the mass ratio of air to fuel present in an internal combustion engine. For gasoline engines, the stoichiometric, A/F ratio is 14.7:1, which means 14.7 parts of air to one part of fuel [2]. It depends on type of fuel. Different fuel gives different AFR. The AFR is necessary for controlling emission and performance-tuning reasons [3]. The mixture combust and produce the product of carbon dioxide, water and nitrogen [4]. The AFR calculation is based on Lambda Oxygen (O2) sensor in gasoline engine. The AFR are defined below [5]:

The AFR is related to mixture of air and fuel. The AFR is important measure for anti-pollution and performance tuning reasons. Furthermore, it is important to know the AFR at which exactly all the available oxygen is used to burn the fuel completely or at least to the best possible value. This ratio is called stoichiometric AFR. However, standard stoichiometric AFR is not giving best performance when modification of modified piston geometry and compression ratio is done. The stoichiometric mixture in gasoline engine and its products are defined below:

where the mixture of fuel, oxygen and nitrogen produce the products of water, carbon dioxide and nitrogen.

Lambda O2 sensor is an electronic device that measures the proportion of oxygen (O2) in the gas being analyzed. It controls the AFR in internal combustion engine which is lean, rich or stoichiometric. The zirconium dioxide, or zirconia, lambda sensor is based on a solid-state electrochemical fuel cell called the Nernst cell. The two electrodes provide an output voltage corresponding to the quantity of oxygen in the exhaust in the atmosphere. The ECU is a control system that adjusts the AFR based on the feedback from the sensor. The AFR calibration is crucial for performance and durability of the engine based on the sensor. A lower AFR number contains less air than the 14.7:1 stoichiometric AFR is a richer mixture. Higher AFR number contains more air and therefore it is a leaner mixture. Leaner mixture gives more power and efficiency but increase in engine temperature. Richer mixture provides cooler temperature in engine but less power and produce unburn fuel. Rich and lean mixtures depend on the type of engine [6].

Based on the reason above it is necessary to do research deals with investigation, rebuilding and analyzing on AFR of a gasoline engine together on the modification of piston geometry and compression ratio. Therefore, it is expected to determine the best AFR for modified gasoline engine to give peak performance.